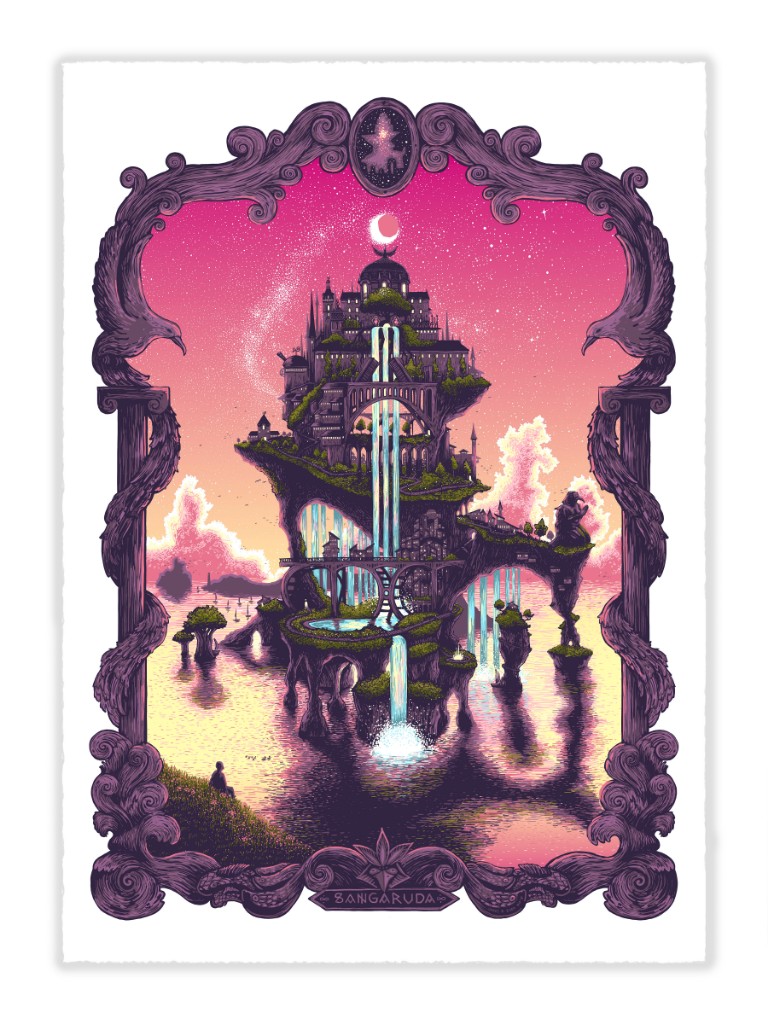 I've teased a few pieces of this print that we've been working on the past month here in the studio, but here is the official first look at "Sangaruda, the Violet City".

We're doing something a little different with this print as there will be both a screenprint and a giclee edition. The screenprint is a 20" x 28" eleven color print with a split fountain on Cougar Natural white paper. Prints are hand signed and numbered in a limited edition of 75 and come with an accompanying four color screenprinted certificate of authenticity/poem.

The giclee version is a 16" x 20" print on Moab Entrada Natural Rag. Prints are hand signed and numbered in a limited edition of 200 and come with an accompanying poem.

There are two reasons why I am releasing two different prints. The first is an experiment to see how a labor intensive screenprint fairs against a high quality giclee print. The second reason was to test our screenprinting skills, and let me say - the screenprint looks phenomenal. 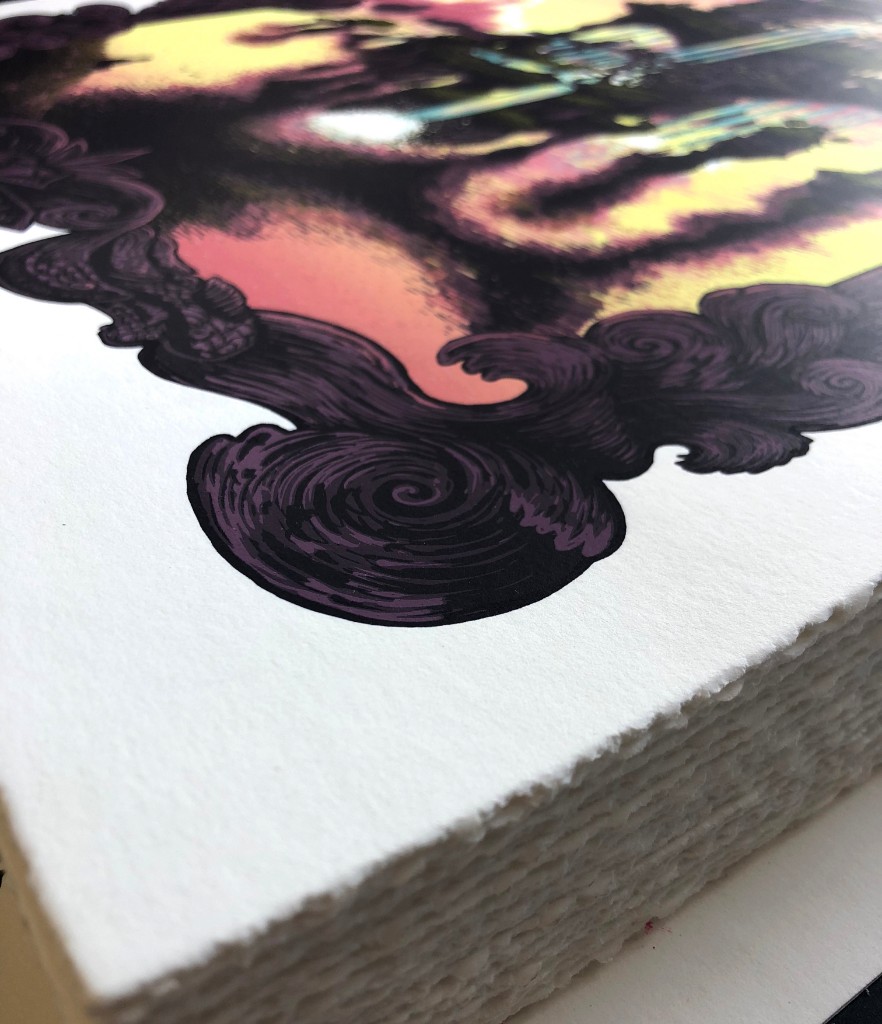 Both versions of the print come with the accompanying words, but the screenprinted poem is also a signed and numbered Certificate of Authenticityon Stonehenge Steel Grey Paper. 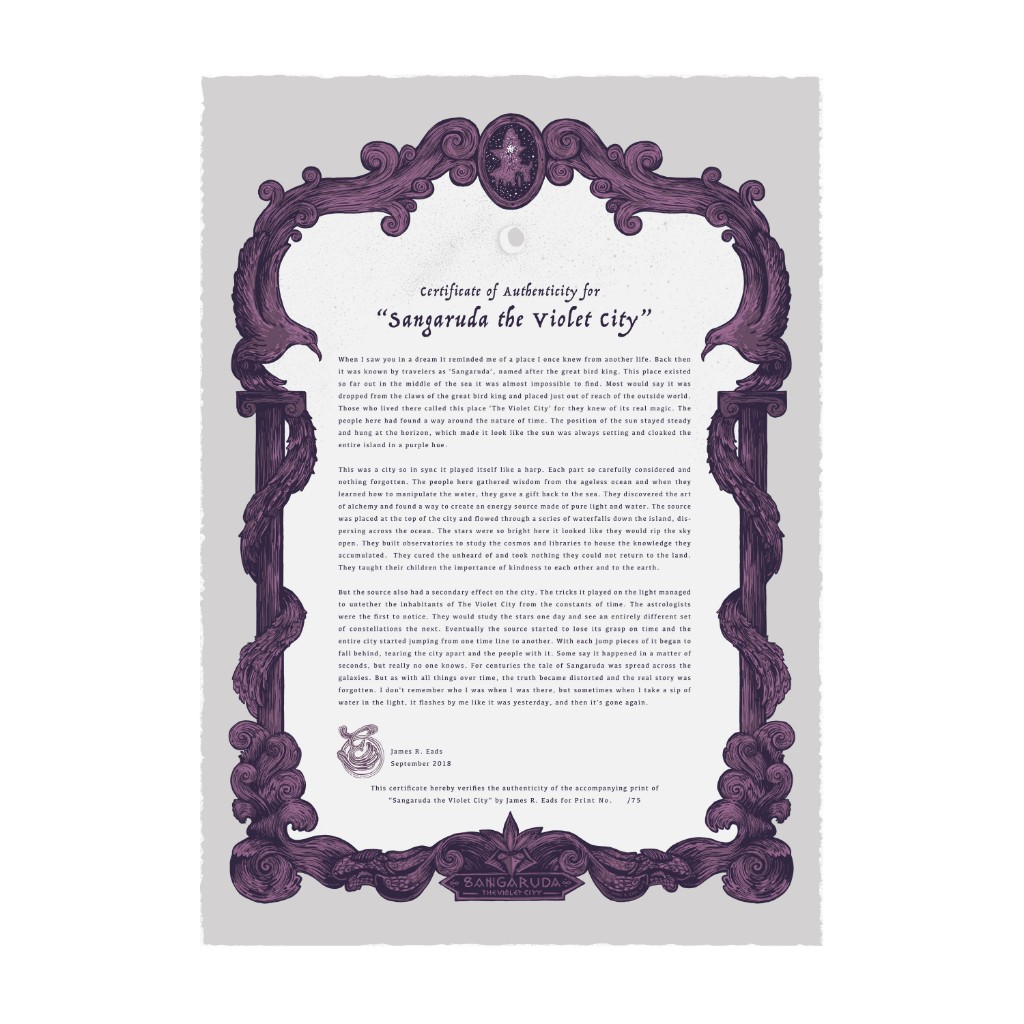 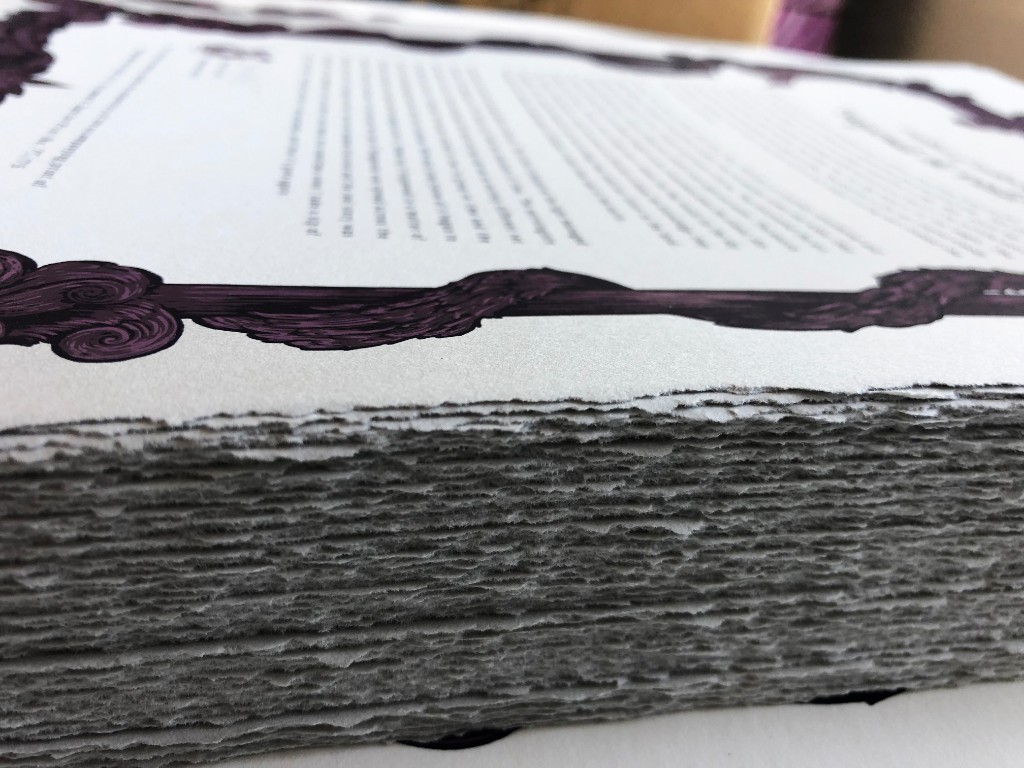 "When I saw you in a dream it reminded me of a place I once knew from another life. Back then it was known by travelers as ‘Sangaruda’, named after the great bird king. This place existed so far out in the middle of the sea it was almost impossible to find. Most would say it was dropped from the claws of the great bird king and placed just out of reach of the outside world. Those who lived there called this place ‘The Violet City’ for they knew of its real magic. The people here had found a way around the nature of time. The position of the sun stayed steady and hung at the horizon, which made it look like the sun was always setting and cloaked the entire island in a purple hue.

This was a city so in sync it played itself like a harp. Each part so carefully considered and nothing forgotten. The people here gathered wisdom from the ageless ocean and when they learned how to manipulate the water, they gave a gift back to the sea. They discovered the art of alchemy and found a way to create an energy source made of pure light and water. The source was placed at the top of the city and flowed through a series of waterfalls down the island, dispersing across the ocean. The stars were so bright here it looked like they would rip the sky open. They built observatories to study the cosmos and libraries to house the knowledge they accumulated.  They cured the unheard of and took nothing they could not return to the land. They taught their children the importance of kindness to each other and to the earth.

But the source also had a secondary effect on the city. The tricks it played on the light managed to untether the inhabitants of The Violet City from the constants of time. The astrologists were the first to notice. They would study the stars one day and see an entirely different set of constellations the next. Eventually the source started to lose its grasp on time and the entire city started jumping from one time line to another. With each jump pieces of it began to fall behind, tearing the city apart and the people with it. Some say it happened in a matter of seconds, but really no one knows. For centuries the tale of Sangaruda was spread across the galaxies. But as with all things over time, the truth became distorted and the real story was forgotten. I don't remember who I was when I was there, but sometimes when I take a sip of water in the light, it flashes by me like it was yesterday, and then it’s gone again." 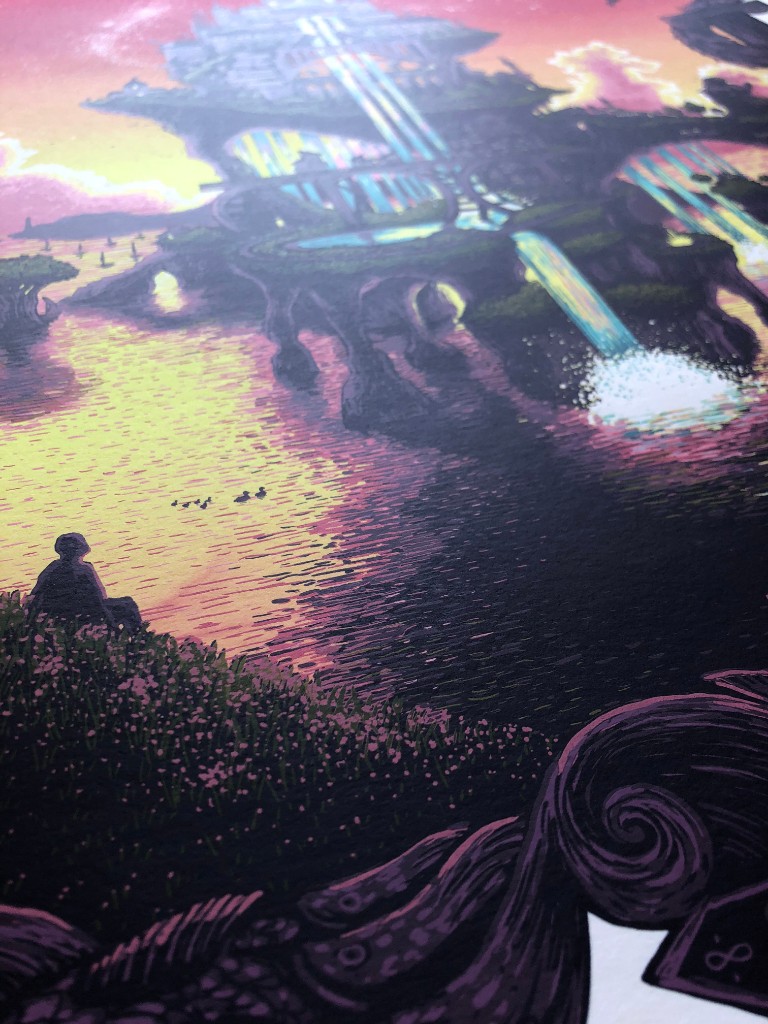 Both prints will drop in the shop on Tuesday, October 2nd at 3PM pacific time. You can take a closer look at more photos of the screenprint here and the giclee print here.